This is the forecast for the weekend:

Yes, we live in Wisconsin. No, these Spring snows aren’t abnormal. Yes, I am pouting. No, you can’t tell me to Buck Up.

Since Wednesday and today were reasonably nice (for this year, anyway) I decided to go ahead and get stuck into the Veg Garden anyway. Forecast be damned!

Cleaning up the (truly pitiful, shameful, and woeful) weed situation leftover from last year’s neglect needed to be done sooner rather than later. That way it gives the billions of weed seeds hanging out (the penance for our severe neglect whilst building the Main Garden) a chance to sprout so that I may mercilessly kill them before the veg go in.

Check out that before and after! And say hi to my husband Rich, without whom this entire enterprise would not be possible. Or at the very least would be 2 years further behind where it is now. He’s the best.

The Spinach and Peas are already 2 weeks late anyway, so sowing them now- even if they fail- certainly can’t put me any further behind than I already am. The rain and snow should do well to water them in. 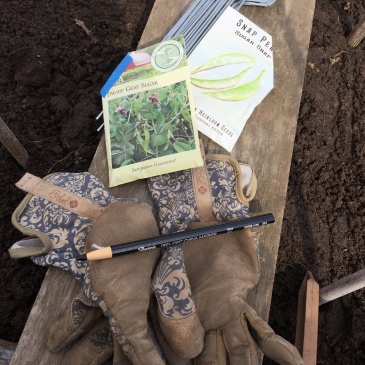 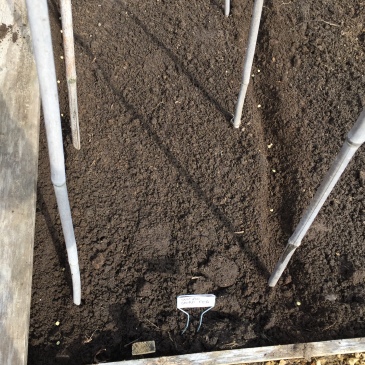 Good Maude, it feels like every picture I’ve posted is shades of brown and grey. I promise things will get more colorful around here! Just give me some time! But heavens, it was lovely to get my hands dirty again, write up some of my new metal (and reusable) plant tags, and get some seeds into the ground.

Miss Maisey has been more than glad to soak up the sun and clearly approves of the new raspberry bed turned dog bed. Who would have the heart to tell her it isn’t actually a dog bed? Certainly not I.

Happily the chives, onions, kohlrabi, and fava beans are out in the greenhouse now that the overnight temps aren’t too low for the radiator to cope with. This means the trays under the lights are getting more attention, the tomatoes, peppers, and eggplant have all sprouted and are on their way.

The flat leaf parsley and cilantro I started in soil blocks about 3 weeks ago refused to germinate so I assumed the seeds weren’t good and chucked the blocks back into the soil bin. I then started out a new tray for the savory varieties I’m growing for a local Seed Trial (more to come on that later). You can imagine what happened next.

And I’ve no idea if its cilantro or parsley. I suppose there is an easy way to check once the leaves get going. But really? Total rookie mistake.

In any event, I hope your weather forecasts are nicer than ours and that Spring is kicking into gear wherever you are!

1 thought on “Forging Ahead.”